If you’ve been following my blog, you probably know that my son has low vision. Since the age of 8 weeks, me and my husband have become great friends with his pediatric ophthalmologist, as we are pretty much regulars at his office.

During his latest appointment at the end of October, it didn’t come as a huge shock to me when he recommended eye muscle surgery to reduce nystagmus (involuntary eye movement) and strabismus (eyes turning inward). He told us that this surgery should help bring his vision at least one line up on the vision chart, which has significant functional implications. We agreed, and since we are both full-time working parents, scheduled the surgery for the day before Thanksgiving, so that we could both be home with him as he recuperated.

I went full-on into preparatory mode. He likes to feel a sense of control in general; his decreased vision makes life feel out-of-control, at times, and we are always working on giving him a sense of empowerment, when possible, while also teaching him that there are things in life that are out of our control. 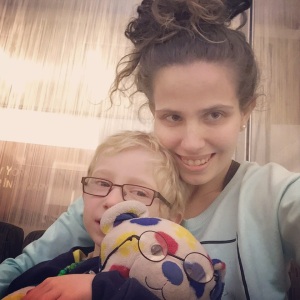 Here are some of the things that we did before surgery to make it go as smoothly and predictable as possible:

1. Books that Preview the Experience: I bought him the book, “Blueberry Eyes”. It talks about eye problems, leading up to details of eye surgery and recovery. We read that book almost every night for two weeks leading up to his surgery. He brought it into school, and his teacher read part of it to the class! He brought it to the hospital, and we read it while waiting to go in.

2. Give Something to Look Forward to: He chose PJs to wear over the holiday weekend. We went online, and he chose three new pairs. He refused to change out of those pajamas the entire weekend! When Yosef would verbalize fear about the surgery, we would address it, validate his fears, he would choose a strategy, but also remind him of fun things to look forward to afterwards, like his new PJs.

3. Bring Something Comforting from Home: He brought his favorite stuffed animal, Captain Cuddly Bear, to the hospital. We asked for the bear to get a hospital bracelet, and we wrote his name. He even got to come in to the operating room while Yosef got anesthesia, and the doctors first put it on the bear’s face. Yosef squeezed his bear until he fell asleep from the medicine, and I quietly took the bear out of the room, only to return it the minute he came into recovery.

4. Bubble Breathing: When Yosef woke up from anasthesia, he was terrified. He repeatedly screamed to get all the IVs out. What calmed him down was when I told him that if he could take deep breaths and stop crying, he could drink a cup of juice and get all the tubes out of his body. Hearing the familiar word “bubble breath” as a strategy quickly got him to calm down. 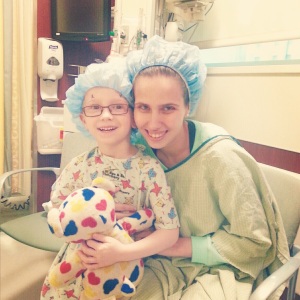 5. Giving Control Over Something Scary: When we got home, eye ointment was a real challenge. Luckily, he was able to verbalize that he didn’t like that everyone was putting things in him, and that he felt like nobody was listening to him. We asked him where in the house he wanted to do the eye ointment (he chose his bedroom), and it turned out he wanted to wipe his eyes with a tissue first. This process turned into us having a ritual of doing a silly handshake before doing ointment, where, while he didn’t actually enjoy it, putting in the ointment felt tolerable.

6. Processing the Experience through Play: We ased to bring home his hospital gown, and bought paper booties from Home Depot. A few days ago, he asked to put on his hospital clothes and ‘shoes’, during a play date at our house with a friend. He was so excited to show them to everyone. Play is an amazing and healthy way for children to process complex emotions and experiences.  I was thrilled that he sought to do this independently!

Thank goodness, this experience is over. As a mom, it was hard for me to realize that I can’t control everything either. Waiting for him to come out of surgery while he was under general anesthesia was pretty difficult.

His eyes are still bright red, but he is happily running around the house and creating awesome inventions, as usual. If you have a child going through something similar, I hope that this post helps you in some way. Have a great week!😊